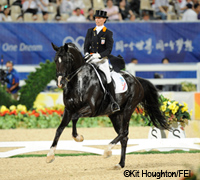 During the final Olympic individual dressage competition, the rivalry never let up between Germany’s Isabell Werth riding Satchmo and The Netherlands Anky Van Grunsven aboard Salinero. The dressage queens each showed why they are the best in the world. But there can only be one gold medal winner, and this time around it was Van Grunsven’s turn. She turned in an unbelievable score of 82.40%, well ahead of the rest of the field of 25 riders. Werth had to settle for silver with a score of 78.10%; Germany’s Heike Kemmer took bronze with a score of 75.950% aboard Bonaparte.

The two Americans, Steffen Peters riding Ravel and Courtney King-Dye aboard Harmony’s Mythilus, each had very respectable performances. Peters turned in a score of 76.5%, just putting him out of medal contention in fourth place; King-Dye scored 69.55% putting her in the 13th spot.

American rider Debbie McDonald and the mare Brentina did not make the Individual final after an incredibly uncharacteristic performance in the Team competition. During that Team competition Germany claimed gold, The Netherlands took silver and Denmark grabbed bronze.

While the American dressage riders didn’t walk away with any Olympic medals this time around, you can bet they are looking toward London in 2012… with a vengeance.