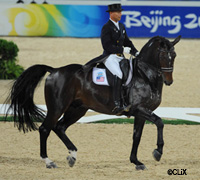 Coming into the 2008 Olympic Games, American dressage rider Steffen Peters was pegged as a medal contender. Riding the formerly undefeated 10-year-old KWPN gelding Ravel, Peters put in a masterful performance during the Games, landing in fourth place overall, just shy of a medal.

But at 39 years old, Peters can look toward future Games with great expectations. He is an Olympic veteran after all, having achieved Team Bronze for the U.S. during the 1996 Games, and now he’s also got the experience of the 2008 Games behind him.

Peters grew up in Germany and started riding at the tender age of 7. By the time he hit his teen years, he was riding the legendary Udon. Together, horse and rider moved to the United States in 1985; Peters later became an American citizen in 1992. The move was good fortune for the U.S. Olympic dressage team, because it was during the 1996 Atlanta Games that Peters and Udon helped Team USA win bronze.

With all his experience 2008 looked bright for Peters, but it wasn’t meant to be. Speaking about his performance after the final round of dressage competition during this year’s Games, Peters said, “Sometimes you have dreams. Today felt like a dream, and I felt like I was in charge of it; it just wasn’t quite enough for the bronze. You have to go for it but you also have to be realistic.”

Riding to music by the Talking Heads and the Rolling Stones, Peters and Ravel delivered a strong routine during their final Grand Prix Freestyle, scoring a 76.5%. The duo’s overall score, after competing in the Team competition and the Grand Prix Special, was 74.15%., a mere .3% behind Germany’s bronze medalist Heike Kemmer.

Peters was ultimately left off the medals’ podium, but he’s optimistic. “I had to risk it, so fourth place at the Olympic Games is not so bad,” he said after his final 2008 Olympic performance. “My horse lived up to my expectations 100 percent. This is a great stepping stone for Ravel. I feel like there is a big future for him.”

Maybe that future will include the 2012 Olympic Games in London, with Peters on board.