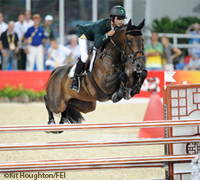 Brazilian Olympic show jumping champion Rodrigo Pessoa has been officially disqualified from the 2008 Olympic Games after an investigative panel rendered its final decision in the prohibited substance case involving the horse he was riding at the Games. Pessoa’s mount, Rufus, a 1998 Dutch gelding, tested positive for a banned substance, Nonivamide, which is a pain reliever and an agent that can be used for hypersensitization purposes.

The panel, formed by Federation Equestre Internationale (FEI) appointed members, determined that Pessoa is officially disqualified from the 2008 Olympic Games and will be suspended for a period of four and half months through January 10, 2009. He is also being fined.

Pessoa, who finished fifth overall in the Individual show jumping competition during this summer’s Olympic Games in Hong Kong, has a long list of championship wins to his name, including a Team bronze medal from the 2000 Sydney Olympics and an Individual gold medal from the 2004 Athens Olympics.

According to an FEI statement, “the justifications for the sanctions [against Pessoa] are the principles which are at the core of the FEI Equine Anti-Doping and Medication Control Rules, according to which ‘It is each Person Responsible’s personal duty to ensure that no Prohibited Substance is present in his or her Horse’s body during an Event. Persons Responsible are responsible for any Prohibited Substance found to be present in their Horse’s bodily Samples. Accordingly, it is not necessary that intent, fault, negligence or knowing Use on the Person Responsible’s part be demonstrated in order to establish an anti-doping rule or medication control violation.’”

In reaching its decision, the FEI panel concluded the substance at issue–Nonivamide–was a “Medication Class A” rather than a “Doping” substance based on its interpretation of the list of prohibited substances.

In considering the sanctions, the FEI took into account:

On the other hand, the FEI also considered

Rodrigo Pessoa has 30 days to appeal this decision to the Court of Arbitration for Sport (CAS).

My Horse Leans on Me When I Pick His Feet