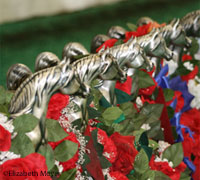 The 42nd Annual U.S. National Arabian and Half-Arabian Championship Horse Show (U.S. Nationals) is making its debut in Tulsa, Okla., October 17-25. The move comes after years of the show alternating venues between Albuquerque, N.M., and Louisville, Ky. This year is the first of a three-year contract with the city of Tulsa that was four years in the making. According to a formula developed by the International Association of Convention and Visitors Bureaus, the U.S. Nationals will have approximately an $18.2-million impact on Tulsa.

The U.S. Nationals reign as the flagship competition for the Arabian horse industry in America and the grand finale of the show season. Almost 1,800 horses from all over the U.S. and Canada will be in Tulsa to compete in 125 classes that include reining, cutting, working cow, trail, mounted native costume, pleasure driving, show hack, in-hand, sidesaddle, park, and English, hunter and Western pleasure.

U.S. Nationals will again host the nationally accredited Arabian Horse Youth Judging Contest, which attracts more that 150 youth contestants from all over the U.S. and Canada, competing in three divisions: 4-H/FFA, Junior AHA and Senior AHA/Collegiate Teams. The contest awards youth contestants over $10,000 in scholarships and prizes annually.

This year’s show is highlighted by another huge shopping expo and a Final Saturday Spectacular, featuring a freestyle reining invitational, cowboy mounted shooting and a Barn Party Exclusive.

For more on the Arabian horse, visit HorseChannel.com’s breed profile.