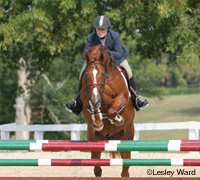 Are you a young show jumping competitor with Olympic dreams? Here’s your chance to shine on the international stage: The upcoming 2009 Australian Youth Olympic Festival in Sydney, Australia, January 14-18, 2009, is giving riders ages 15 to 20 years old a chance to compete in an Olympic setting.

If you are interested in this unique opportunity, there is an October 31, 2008 application deadline. Selection procedures, applications, and official standings can be found on the show jumping page of the USEF website at www.usef.org/Contentpage2.aspx?id=natjumping. For more information on the AYOF, visit /redirect.php?location=http%3a%2f%2fcorporate.olympics.com.au%2fgames%2f3016%2f2009%2bAYOF.