The Invitational always pulls out all the stops, with top-ranked equestrians from across the country and the world. This year’s event features appearances by all members of the 2008 Gold-medal Olympic show jumping team. Additionally, an international field of competitors will vie for the Budweiser World Cup Qualifier of Syracuse and the Animal Planet Sporthorse Cup (featured broadcast on Animal Planet on January 10, 2009). In addition, the finest junior riders in the U.S. will contest the National Horse Show ASPCA Maclay Championship. The ASPCA Maclay Horsemanship class has been held since 1933, and it is one of the most prestigious competitions for junior riders in the United States. Its winners are some of the biggest names in equestrian sport. Previous winners include: William Steinkraus in 1941, Frank Chapot (1948), George Morris (1952), Leslie Burr Howard (1972), Stacia Klein Madden in 1987, and Nicole Shahinian Simpson in 1992.

A schedule and details of Tournament events and seminars along with the complete competition schedule are available at: www.SyracuseInvitational.com. 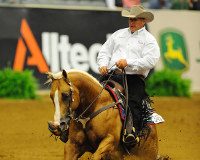