Most states reported a large animal rabies case from 2002 to 2006. However, there are eight states that each have more than 41 reported cases of rabies in horses, cattle or sheep: Texas, South Dakota, Oklahoma, Virginia, Kansas, Nebraska, Iowa and New York.

“Rabies is a potentially deadly disease that is preventable,” says Frank Hurtig, DVM, director of Veterinary Services for Merial. “These states have a higher number of rabies cases, which increase the chance of exposure, but it’s important to remember that exposure to just one rabid animal could be fatal. Not just for that animal, but also for the people who interact with it.”

Rabies can be transmitted from infected animals to humans through saliva. Wild animals primarily transmit the disease. Horses, cattle and sheep are all at risk for encountering infected wild animals–and contracting rabies–while in the barn or pasture. If infected, rabies is almost always fatal for both animals and humans.

Signs of rabies can vary between species. Horses may show evidence of agitation that could be confused with colic. On the other hand, infected animals may exhibit minimal behavioral changes in the “dumb” or paralytic form.

A single case of rabies during an event can put thousands at risk. In 2006, the Centers for Disease Control and Prevention (CDC) notified more than 150,000 people who attended the Tennessee Walking Horse National Celebration of potential rabies exposure after a case was confirmed during the event.

“Rabies is a fundamental vaccine for all horses, whether competing or out on the pasture,” Dr. Hurtig says. “For a small investment in vaccination, you can help protect cattle, horses and everyone at the competition or on your farm.”

Talk to your veterinarian about vaccination against rabies. You can find more information about equine vaccination guidelines at: /redirect.php?location=http%3a%2f%2fwww.aaep.org%2fimages%2ffiles%2fAdultvaccinationtablerevised108.pdf 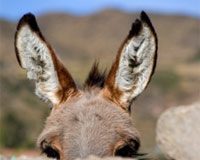 The Brooke helps working horses and donkeys by helping the women...