Victory over the elements
A new queen of Endurance has been crowned, as Spain’s Maria Alvarez Ponton clenched individual gold at the 12th FEI World Endurance Championship, while the United Arab Emirates were awarded team gold, from the FEI.   Read more >>

Pollmann’s double clear good enough for victory in Verona
He was last to go, both in the first round of the Verona Rolex FEI World Cup™ competion and in the jump off, but in the prize giving ceremony, Alois Pollmann-Schweckhorst was first to be congratulated, from the FEI.  Read more >>

Saddle Up For Life at the AQHA World Show
Join the American Quarter Horse Association as it gives a tribute to horsemen and horsewomen who have fought the battle with cancer at the second annual Saddle Up For Life on November 14 at State Fair Park in Oklahoma City, from the AQHA.  Read more >>

Cremello is a thoroughbred first
The first thoroughbred cremello horse in the UK has been officially recognised by the International Thoroughbred Studbook Committee (ISBC), from Horse and Hound.  Read more >>

Horse Play: Area woman’s masks reveal animal’s point of view
Get in touch with your inner horse. That’s what Melissa Shandley tries to do with her line of anatomically correct horse masks, from The Gazette.  Read more >>

Good question: Is horse’s gift to gardening OK to use?
Is horse manure OK to add to my compost pile? from the Sacramento Bee.  Read more >>

What to do with body of a dead horse?
Joan Kleinschmit-Tucker has been rescuing unwanted or abandoned horses for about seven years. Occasionally, one will die, from FREEP.  Read more >>

Two jockeys critically hurt after horse dies on Phoenix track
Two jockeys were rushed to a local hospital Sunday evening after a horse collapsed and died during a race at Turf Paradise Racing Course in Arizona Sunday evening, from ABC15.  Read more >> 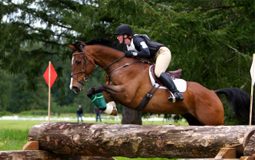