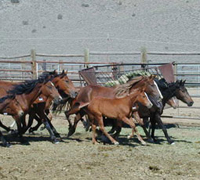 The Government Accountability Office (GAO), the investigative arm of Congress, released a report on November 10 that provides recommendations to the U.S. Bureau of Land Management (BLM) regarding its Wild Horse and Burro Program. The report, titled “Bureau of Land Management: Effective Long-Term Options Needed to Manage Unadoptable Wild Horses,” recognizes that the BLM does not have the budget to manage the horses that have been rounded up and remain unwanted. “The number of animals removed from the range is far greater than the number adopted or sold, which has resulted in the need for increased short-term and long-term holding,” the report says.

The report summarizes that the long-term sustainability of the BLM’s Wild Horse and Burro Program depends on the resolution of two significant challenges: “(1) If not controlled, off-the-range holding costs will continue to overwhelm the program. The percentage of the program’s direct costs for holding animals off the range increased from $7 million in 2000 (46 percent) to $21 million in 2007 (67 percent). In 2008, these costs could account for 74 percent of the program’s budget. (2) BLM has limited options for dealing with unadoptable animals. The act [Wild Free-Roaming Horses and Burros Act of 1971, as amended] provides that unadopted excess animals shall be humanely destroyed or, under certain circumstances, sold without limitation. However, BLM only manages these animals through sales with limitations. BLM is concerned about the possible reaction to the destruction of healthy animals.”

The report makes several recommendations, including instituting clearer guidelines for establishing appropriate management levels of horses on public lands and developing cost-effective alternatives to the process of caring for wild horses removed from the range in long-term holding facilities and to seek the legislative changes that may be necessary to implement those alternatives.

One of those alternatives relates to how the BLM complies with the Wild Free-Roaming Horses and Burros Act that was passed in 1971 to protect wild horses and burros. While the Act was designed to protect horses, it hangs in limbo after Senator Conrad Burns (R-MT) attached a highly controversial rider to a massive appropriations bill in 2004 that eliminated the prohibition on killing wild horses and burros.

This fall the BLM announced it was considering euthanizing excess wild horses due to budget constraints. The GAO report recommendations state that the BLM should discuss with Congress how best to comply with the Act or amend it so that the BLM would be able to comply. Additionally, the report states that the BLM “should inform Congress of its concerns with (1) the Act’s requirement for the humane destruction of excess animals and (2) the possible slaughter of healthy horses if excess animals are sold without limitation, under certain circumstances, as the Act requires.”