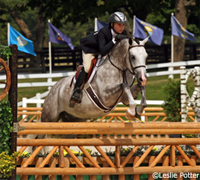 The Official Artist of the USEF Pony Finals for 2009 will be required to create artwork (painting or drawing) that represents the atmosphere at Pony Finals. The winning artist’s work will be featured on Pony Finals merchandise, advertising, a commemorative poster and potentially the cover of the 2009 USEF Pony Finals prize list and show program.

To get started, contact the USEF’s Scott Carling, managing director of sales and sponsorships, at scarling@usef.org or (859) 225-6928, for an official bid packet and submission guidelines. Bid packets will be available until Wednesday, December 31, 2008.

Learn what it’s like to have a career as an equine artist.