USEF Eventing Watch List to Become Effective January 1
The United States Equestrian Federation (USEF) Executive Committee approved the specifications for the Eventing Watch List on November 17, 2008. Born out of discussions at the USEF/USEA Safety Summit in June, the goal of the Watch List is to notify riders at USEF licensed and USEF endorsed Eventing competitions that their riding is potentially dangerous, from the USEF.  Read more >>

Cash-Strapped Horse Owners Turn to Euthanasia
A first of its kind free horse euthanasia clinic in Oroville, Calif., filled up quickly Wednesday, as more and more owners struggle to afford keeping all their horses, from News10.  Read more >>

New evidence set to help horses transported live for slaughter in Europe
World Horse Welfare has submitted a large file of evidence to the European Commission in support of changes it is requesting to the laws governing the long distance live transport of horses for slaughter, from Horse and Hound.  Read more >>

Equestrian Aid Foundation and USDF Partner to Raise Funds
The United States Dressage Federation (USDF) and Equestrian Aid Foundation (EAF) announced today they will be working together at the 2008 Adequan/USDF National Convention to raise funds in support of the EAF in honor of EAF co-founder Robert Dover, a 2008 inductee into the Roemer Foundation/ USDF Hall of Fame and founder of the EAF, from the USDF.  Read more >> 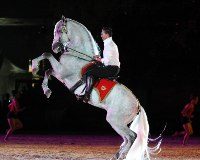