Jumpers Take Center Stage at Atlanta Fall Finale
“I like to think it’s Holiday bonus time,” said Bob Bell, President of Classic Company, of the nearly $150,000 in prize money awarded during this finale week of the Atlanta Fall Series, from the USEF.  Read more >>

Louisiana Parish Sheriff’s office arrests horse theft ring
Three men have been arrested on charges of horse theft and a fourth is expected to surrender to authorities later today, from the Daily World.  Read more >> 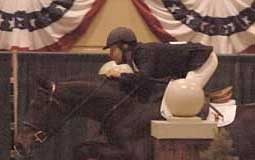