Stress on the Showground: Quick Tips to Reduce Horse Show Stress
Every competitive horse owner knows that showtime is stressful. However, stress from training to trailering can affect horses, too, from the USEF.  Read more >>

Israeli riders plan month-long US horse trek
Six Israeli horse riders will spend a month riding along the eastern United States to mark the 60th anniversary of the founding of Israel, from Horse Talk.  Read more >> 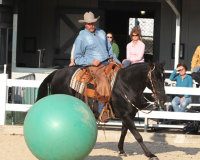