Racing moves to regain credibility
It’s a long time since a thoroughbred executive trashed the racing business as harshly as Craig Dado did in San Diego last week, from The New York Post.  Read more >>

…And They’re Off! Animal Planet Exposes the Most Dangerous Two Minutes in Sports in New Horse Racing Docu-Drama Jockeys
Get ready for the ride of your life, from PRNewswire.  Read more >> 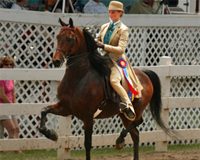