Horse owners mourn lost family members
The last time this group came together, they huddled and cried at the wreckage of a barn that had burned, killing all 15 horses inside, from The News Tribune.  Read more >>

Horse Rescue near the BC Alberta Border
At last word, a rescue was continuing today on the slopes of Mount Renshaw on the B-C/Alberta border just west of Jasper, as volunteers try to reach two horses trapped in heavy snow, from Energetic City.  Read more >>

The Luckiest Horse In Reno: A Christmas Story
When the men approached, the black foal might have been nursing. Or she might have been on her side, giving her wobbly legs a rest, leaning into her mother under the starry desert sky, from The Huffington Post.  Read more >> 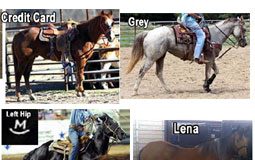