Free to a good home — the horse of your choice
Jon Lucas drives his weathered Chevy pickup to a small horse ranch in Clayton, Calif., twice a day to feed a pair of pet horses he can no longer afford, from InsideBayArea.com.  Read more >>

Hay … horse owners, there’s help out there for you
A new program in Central Oregon works to ensure everyone’s horses have enough in a difficult economy, from The Bulletin.  Read more >>

Family seeks help in search for stolen horse
A family with a history of caring for unwanted horses is asking the public to help find its stolen mustang, which was rustled last month, from The Sacramento Bee.  Read more >>

Horse rescuer outraged
A group of volunteers who spent a week rescuing two trapped horses in snowy B.C. mountains are furious the owner who abandoned them wants the animals back, from the Edmonton Sun.  Read more >>

Death by Jaffa cakes: The horse killed with kindness after passers-by fed him ‘treats’
A horse has been killed by kindness in the U.K. after well-meaning passers-by fed it Jaffa cakes, dog biscuits and other ‘treats’, from the Mail Online.  Read more >>

Update on U.S. Eventing from the Annual Meeting
The Training Level Three-Day Event.  The USEA is pleased to announce that the Training-level Three-day Event will be included in the USEA/USEF Endorsement Agreement for 2009, from the USEA.  Read more >>

Once destined for the slaughterhouse, gelding is named 2008 Horse of Honor
The best thing that ever happened to a horse named Jamaica was that he contracted a skin disease, from The Gainesville Sun.  Read more >>

Wounded warriors Disabled veteran shares rough history with his horse
Since July, visitors to Ludlow, Vt., have been treated to an unusual sight — a Native American man riding his horse through town, from the Times Argus.  Read more >>

Horse-rescue prison program rehabs horses and inmates
Sadie kept to herself after she came through the gates at Pulaski State Prison. Months of abuse and neglect had taken their toll on the 12-year-old Appaloosa mare who is blind in her left eye, from Macon.com.  Read more >> 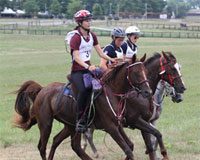 Events conclude at the 2012 North American Junior and Young Rider...