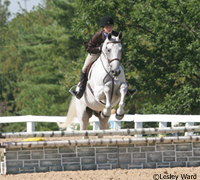 A new program in Kentucky is doing its part to help reduce the unwanted horse problem.

The Kentucky Horse Council (KHC), in partnership with the Kentucky Hunter Jumper Association (KHJA), has announced a plan to reward KHJA members competing on rescued horses in 2009.

A $300 cash prize will be given to the KHJA competitor riding a rescued horse with the greatest accumulation of points in 2009. Year end points are tallied by KHC, and the 2009 rescue horse high-point winner will be recognized at the 2010 KHJA banquet and at the KHC Annual Conference.

Any KHJA member who competes on an adopted horse is eligible for a year-end high-point award regardless of the competing division. Interested KHJA members should apply by completing a form available through KHJA or the KHC office and including a copy of the adoption contract. KHJA members seeking to compete for the high-point award on rescued horses without an adoption contract may submit an application and essay describing the rescue situation. A panel of KHJA representatives and KHC staff will review applications and make eligibility decisions.

“Supporting the rehoming and retraining of horses through this program is just one of the ways the Kentucky Horse Council encourages equine rescue and rehabilitation efforts,” says Madelyn Millard, KHC board president. “In this economic climate it is especially important to provide recognition and support those horse owners who develop second careers for rescued horses.”

KHJA show managers will have information and applications at 2009 horse shows. Only KHJA members who have completed an application and submitted it to the Kentucky Horse Council will be eligible for the year-end award. For more information, contact Essie Rogers at (859) 367-0509 or erogers@kentuckyhorse.org.

Read more about rescue horses at HorseChannel’s Diary of an Equine Rescue.