What do you do with a Thoroughbred that loves to run but isn’t quite speedy enough for flat races? And what if that Thoroughbred seems to love to jump as well? How about steeplechasing, where running over turf is combined with leaping over hedges and barriers. The sport seems to be recovering from a stagnant, bleak period in the late 1990s. In fact, total purses for steeplechase racing in 2007 reached a record $5,357,645, up 10.5 percent from last season, according to the National Steeplechase Association. The average race purse of $26,655 was also a record, up $4,112 per race from 2006, according to the organization’s year-end statistics.

“This was a very successful year,” says Bill Gallo, director of racing for the National Steeplechase Association. “Our typical barometer is total purses, and they were at an all-time high. We hope to continue that trend in 2008 and reward our horseman. There’s a strong feeling by the [National Steeplechase Association] to increase purses again, so we are looking forward to 2008.”

The 2008 National Steeplechase Association season begins on March 9 at the Little Everglades meet in Dade City, Fla. Palm Beach, Fla., Kentucky Downs in Franklin, Ky., and Penn National Race Course in Pa., all have steeplechase meets in the planning stages. Spectators may get more chances to watch Thoroughbreds run and jump in 2008. 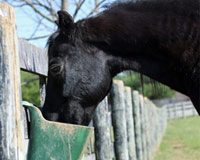