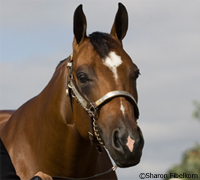 American Quarter Horses return for the fourth year to nationwide television in an NBC Sports special. The AQHA America’s Horse Championships presented by Bank of America is a one-hour broadcast of some of the most exciting action from the FedEx Open competition at the 2008 American Quarter Horse Association World Championship Show in Oklahoma City. The show begins at 1:30 p.m. Eastern Standard Time/10:30 a.m. Pacific Standard Time on January 4 on local NBC stations.

“We’re changing up the programming a bit to give mainstream viewers a greater appreciation for other events,” said Bill Brewer, AQHA Executive Vice President. “No doubt they’ll come away with a great appreciation of the American Quarter Horse and all of his abilities.”

This year’s episode features exciting working cow horse action, which combines reining agility and the cow sense of the American Quarter Horse, testing a horse’s skills in a way that is similar to ranch work. The event consists of two parts – reining or “dry work” and cow work or “fence work.” In the reining portion, the horse follows a predetermined pattern consisting of lead changes, spins and sliding stops. Then the action really picks up with the cow work. The horse matches wits with the cow – holding it at one end of the arena to show control and then driving the cow down the fence, turning it in both directions. Finally, the horse must move the cow to the center of the arena and circle it in each direction.

Highlights from the reining and cutting events also will be featured along with an update about the World Equestrian Games featuring reining, which will be coming to Lexington, Kentucky, in 2010.

The program is presented by Bank of America and includes veteran sports announcer Tim Ryan and jockey-turned-reporter Donna Brothers along with AQHA Professional Horseman Robbie Boyce of Jacksboro, Texas, as analyst. See a special preview of the show on YouTube at http://www.youtube.com/watch?v=O5bxauZJ3YU.