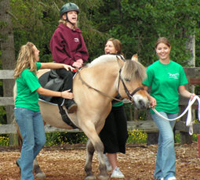 Beginning with 2009, NARHA will change its name from the North American Riding for the Handicapped Association to simply NARHA.

For the past several years NARHA members have been asking for a name that better reflects the mission of NARHA and the work of NARHA member centers. In response to this persistent demand from its membership and others involved with the organization, the decision to shorten the name to NARHA has been made official by a NARHA Board of Trustees.

The term “handicapped” is no longer a correct or appropriate description of those participating in equine-assisted activities and therapies (EAAT) at NARHA centers: it is frequently interpreted as having negative connotations. NARHA emphasizes growth, strength and ability, and the word handicapped simply does not convey the spectacular achievements of NARHA members and participants.

The word “riding” is no longer an accurate description of the services provided at NARHA centers. When NARHA began almost forty years ago, the concept of a professional membership association for those in the field of therapeutic horseback riding was accurate.  However, since 1969 NARHA centers have expanded to offer their participants carriage driving, interactive vaulting, equine-facilitated mental health, hippotherapy and a vast range of other programs that even include groundwork and stable management. NARHA members and volunteers have developed a vast range of spectacularly beneficial EAAT programs, and NARHA wants to recognize these accomplishments and promote all forms of EAAT.

Finally, NARHA membership is no longer limited to North America; the association now boasts individual and center members in countries around the world, from Brazil to Israel to South Korea. NARHA would like the name of the organization to reflect the international scope of EAAT and represent proud NARHA members on every continent.

Adopting the well known and up-to-date “NARHA” name and trademark will allow the organization to continue to stand for the excellence of its programs, members and certification programs.

Learn more about NARHA, including how you can volunteer at a center in your area, at the NARHA official website.