Norwegian rider appeals against Olympic disqualification
Norwegian rider Tony Andre Hansen, who had won a bronze medal but was disqualified from the Beijing Games because of doping to his horse, filed an appeal to the Court of Arbitration for Sport, CAS said on Tuesday. From The Guardian. Read more >>

It’s Liam Neeson Vs Alec Baldwin On NYC Horse Carriage Issue
Liam Neeson has taken issue with a proposed bill to ban the horse carriage business in New York City. The legislation aims to put an end to an industry considered cruel by some, including Alec Baldwin. From Ecorazzi. Read more >>

Cloned horses could offer insight into DNA possibilities
Before the show-jumping champion Gem Twist died in 2006, his New Jersey owners paid to have a flap of his skin frozen – hoping to carry something of his prodigious talent into the future. From The Philadelphia Inquirer. Read more >>

Riding group savors the moment
The Colorado-based Freedom Riders are equestrians who have learned plenty about this inaugural parade thing. From Rocky Mountain News. Read more >>

Horse Rescued From Icy Lawrence County Lake
Rescuers needed a chainsaw to rescue a horse that crashed through an icy lake Sunday. From WPXI. Read more >> 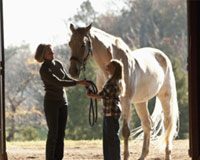