Horse Park, Newtown Pike might be ‘clean zone’ during WEG
The Kentucky Horse Park and Newtown Pike would become a “clean zone” of selected advertising during the 2010 Alltech FEI World Equestrian Games, according to a draft agreement between the city and the WEG foundation to be discussed by city council members Tuesday. From Lexington Herald-Leader. Read more >>

Horses Could Be Euthanized Without Donations
For the first time, agencies devoted protecting large animals might have to kill them. From KCRA. Read more >>

Deal would keep Horse Lovers Park open more often
Users of Arizona Horse Lovers Park will pay new fees to use the facility under an agreement worked out with the city to keep the park open five days a week instead of three. From AZCentral. Read more >>

A horse is not just a horse, of course
Sometimes a horse is more than a horse. When it is a Clydesdale, it is a marketing icon. From Baltimore Sun. Read more >> 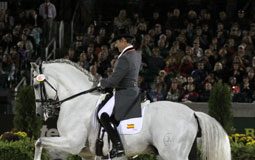 Show Ring Stress: Are horses affected by an audience?