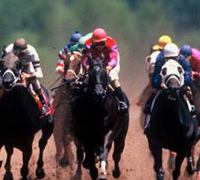 Nearly 10 times a day during the famous 30-day Oak Tree Meet at the Santa Anita Race Track, the world’s most skilled jockeys and the boldest thoroughbreds line up at the gate to compete for big bucks or go home broke. Competition comes from across the country and the world in search of elusive winnings all for the love of horse racing.

Premiering Friday, February 6, at 9 PM ET/PT, Animal Planet presents JOCKEYS, a docu-soap chronicling the lives and careers of seven 112-pound jockeys and their 1,200-pound horses. See who crosses the finish line first in the quest to win a share of more than 35 million dollars in purse money at the prestigious Oak Tree Meet.

“The world of the race track is complex and controversial. Horse racing is one of the most popular sports in the country, and this series is charged with the high stakes, big risks, strong personalities and drama of the sport on and off the track” says Marjorie Kaplan, president and general manager of Animal Planet. “It’s an intense existence that makes for exciting television.”

Audiences get to know the lives of these seven jockeys, their personalities, strengths and flaws. They all have big dreams and even bigger egos and are determined to cross the finish line first — every time.

For these jockeys, everything they have is riding on the next 30 days at the Oak Tree Meet, which leads up to some of the most important races of the season – The Breeders’ Cup, two days of high stakes racing that can canonize a rider’s career.

“So little is known about what goes into becoming a jockey, but these athletes couldn’t triumph without the strength, speed and spirit of their equine partners,” says Kaplan. “I think audiences will be surprised by what unfolds throughout the series.”