Horse Park will host WEG warmup
The Kentucky Horse Park will get a multi-discipline test this summer in advance of the 2010 Alltech FEI World Equestrian Games. From Lexington Herald-Leader. Read more >>

Arkansas Animal Cruelty Bill Signed Into Law
A bill making aggravated cruelty to cats, dogs and horses a felony on the first offense has been signed into law. From ArkansasBusiness.com. Read more >>

Dead horses found dumped with brands cut off
Someone is leaving domestic horses on public land, without a way for the animals to eat or survive. From KTVB. Read more >>

Horses Found Neglected In Carriage Company Tent
Crews on Friday went in to rescue as many as seven horses that were found in poor condition in a tent on the city’s Near Northwest Side. From CBS2 Chicago. Read more >>

Horse on the lam takes authorities for lengthy ride
Gracie the horse may be a little tired and ready for some chow, but she was unharmed after her nearly six mile adventure Thursday afternoon. From The Journal Times. Read more >>

It’s off to new pasture for Nebraska horse
The one-horse town of Hickman is now a no-horse town. An elderly horse that drew worldwide attention for his owner’s refusal to comply with an ordinance barring livestock inside city limits has been moved to a new pasture. From Nebraska.tv. Read more >> 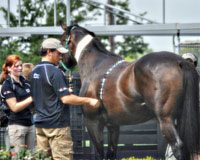