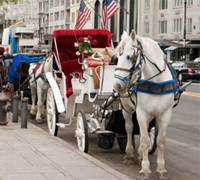 Animal rights activists and carriage drivers in cities across the United States are in the midst of a heightening battle over horses in urban areas.

Many activists maintain that horses do not belong in cities, claiming that the carriage horses work long hours in all weather conditions, are forced to breathe exhaust fumes and risk getting hit in automotive traffic. Carriage drivers counter that they are horsemen making a living through a valuable tradition.

Last week in Chicago, six horses were seized from the JC Cutters carriage company when they were found living in a tent that provided little protection from the winter weather. Animal control inspectors reported that the horses were in poor condition and did not appear to have sufficient food or water available. The city had previously denied JC Cutters a renewal of their carriage license due to several violations, including the horses’ housing not being up to code.

Some cities, including Las Vegas, Toronto, London and Paris have already banned horse-drawn carriages from their streets. Other cities are considering bans, and nowhere is the controversy more heated than in New York City.

City councilman Tony Ayella is spearheading the effort to officially ban carriages from New York, citing accidents that have caused at least three equine deaths and injured several human passengers within the last 18 months. Carriage industry supporters say that banning the horses entirely would slash hundreds of jobs while the unemployment rate is already reaching a record high.

One solution promoted by Councilman Daniel Garodnick is to replace the carriages with replica Model T automobiles. These cars would be either hybrids or fully electric to keep them eco-friendly. Proponents of this plan say that carriage drivers could simply transition into new careers as automobile drivers. Carolyn Daly, spokeswoman for the Horse and Carriage Association, rejected this idea, stating that the carriage drivers “have dedicated their lives to horses.” Additionally it is uncertain whether the cars would have the same appeal to tourists as the horses.