The USET Foundation is pleased to announce a very special opportunity for equestrians. The Gold Medal Olympic Show Jumping Clinic Series will be held at the historic training facility at Hamilton Farm in Gladstone, NJ. The series will offer a spring clinic with 1984 U.S. Olympic Team Gold Medalist Joe Fargis and will continue in the fall with 2004 and 2008 U.S. Olympic Team Gold Medalist McLain Ward. The clinics will benefit the USET Foundation in their pursuit of funding the High Performance equestrian teams.

Those who wish to participate as riders in the clinic will receive two hours of clinic instruction each day for two days, as well as breakfast and lunch daily, one complimentary auditing seat, stabling at Hamilton Farm, and initial bedding.

Auditors will have the opportunity to observe all clinic sessions and will receive breakfast and lunch daily.

Joe Fargis is one of the most successful riders ever to represent the United States Equestrian Team in international competition. During the 1984 Summer Olympics held in Los Angeles, Fargis and his great mare, Touch of Class, won the show jumping Individual Gold Medal and the Team Gold Medal. He became only the second U.S. athlete to ever win an Individual Gold Medal in show jumping. He was also a member of the Team Silver Medal show jumping squad during the 1988 Summer Olympics in Seoul.  Fargis has won countless Grand Prix classes throughout his illustrious career and is lauded as one of the best practical clinicians in the country.

Fargis was a member of the USET training camps and lived at Hamilton Farm from 1969 to 1971 during the winter. There, he worked with then Chef d’Equipe Bertalan deNemethy. Fargis is looking forward to returning to Gladstone to teach riders and pass on the valuable lessons that he learned during his time there. “I’m flattered that they asked me to teach a clinic there,” he said. “I hope the students will leave believing in something that I taught them.”

Fargis wants to emphasize to students that “the horse comes first.” He said, “It’s good horsemanship. The horse is a very valuable partner to us, and we need to appreciate them. We should be as kind and nice to them as they are to us.”

McLain Ward began his riding career at a very young age and has become one of the most successful and talented show jumping riders in the world. In 1999, Ward became the youngest rider to top the $1 million mark in Grand Prix earnings. Together with his famous mount, Sapphire, he was a member of the show jumping Gold Medal Team at the 2004 Olympic Games in Athens and the 2008 Olympic Games in Beijing.

“I enjoy working with new riders,” Ward remarked, “and I hope that they will benefit from all of the things that I’ve been taught over the years. I would like to show riders how to put together a program. I am a big believer in things being done in a certain order. I would also like to speak about the mental game and how to focus; how the puzzle pieces need to be put together for success.”

Ward is one of the High Performance riders that benefits from the USET Foundation’s support. “I’m happy to give my time and services to help the USET Foundation. I want to give back because I’ve gained so much from being able to ride on the team,” he said. 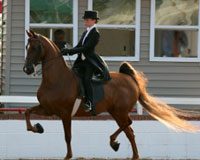