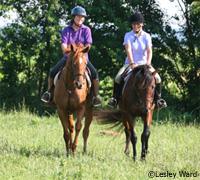 President Barack Obama has signed the Economic Stimulus Act into law.  The bill is intended to provide a jump-start to the U.S. economy.

“The new law contains two important tax incentives that would allow a much bigger write-off for horses and other depreciable property purchased and placed in service during 2009,” said Jay Hickey, President of the American Horse Council.  “These provisions expired at the end of 2008, but their reinstatement should provide an additional incentive for people to purchase horses for racing, showing and breeding as part of their business activities.”

The first incentive continues the so-called $250,000 Section 179 expensing allowance for horses purchased and placed in service in 2009.  This allowance also applies to farm equipment and most other property with a depreciable life of less than 20 years.  Once total purchases of horses and other eligible depreciable property reach $800,000, the expense allowance goes down one dollar for each dollar spent on eligible property over $800,000.

“The horse industry almost lost the Section 179 expense deduction in 1996.  The House of Representatives passed legislation taking this deduction away from the horse industry,” said Hickey.  “But we were able to convince the Senate to remove this restriction before passing the final bill and the deduction was preserved.  It was worth $17,500 then.  Over the years it has been increased and will be $250,000 for 2009.  That is a real benefit to horse owners.”

In addition, bonus depreciation has also been reinstated for 2009 in the new Stimulus Bill.  This second incentive allows a horse owner to take first-year bonus depreciation equal to 50% of the cost of horses and most other depreciable property purchased and placed in service during 2009.  It does not apply to property that has a depreciation life of over 20 years.

“The Stimulus Bill includes several other changes that may benefit horse owners, including allowing taxpayers a deduction for state and local sales and excises taxes paid on the purchase of new cars, light trucks, and recreational vehicles in 2009; a change in the net operating loss carryback period to five years for small businesses; and a reduction for 2009 in the required estimated tax payments for some small businesses,” said Hickey.

Overbite and Underbite in Horses