House panel to take up bill to protect wild horses
The wife of oil tycoon T. Boone Pickens says her proposal for a wild horse sanctuary in the West would be good for the country and save the government close to a billion dollars over the next decade. From The Associated Press. Read more >>

One year later, rescued horse is thriving
One year after he was rescued, a Hardin County horse is thriving. Last year, Nicole Baker found Chance left for dead on the side of the road. From WHAS11. Read more >>

NHSC reports fewer violations in 2008
Walking Horse Advocates recently announced the National Horse Show Commission (NHSC) is moving forward with its commitment to address and correct the problems that have plagued horse training and exhibitions in the past, according to a press release from the organization. From Shelbyville Times-Gazette. Read more >>

Horse killed by outbreak at Northlands
Northlands Park has been forced to close down one of their barns because of an outbreak of equine distemper which killed at least one horse during the recently completed harness meeting. From Canada.com. Read more >>

Seized horses stolen from police
Horses seized from travellers in County Durham have been stolen from an enclosure in a night-time raid. From BBC. Read more >>

RCMP seize stray horses off highways
Alberta RCMP aren’t horsing around when it comes to highway safety. From last December to last month, police seized more than two dozen stray horses that were running loose on Highway 17 and Highway 40 near Hinton. From Edmonton Sun. Read more >>

Couple hopes horses can heal broken spirits
It all began with an e-mail. Horse trainers Cynthia and Tony Royal of Valley Center were on tour with their Andalusian, who portrayed Shadowfax in “The Lord of the Rings” movies, when a friend notified them of a family of rare Polish Arabian horses languishing on a ranch north of Sacramento. From San Diego Union-Tribune. Read more >> 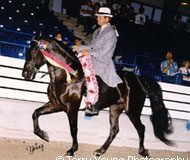