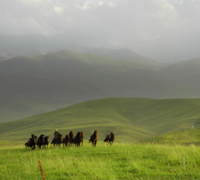 Horses have long helped to shape human history, and recently published research shows that the origin of the horse-human relationship goes back even earlier than previously thought.

A report in the March 6 issue of Science magazine details the findings of a group of researchers who studied archeological evidence of horses in the Eneolithic Botai Culture of Kazakhstan. From their findings they concluded that this culture had domesticated horses around 3500 B.C.

Among the evidence they found was damage to the teeth in horse skulls consistent with wear that would occur from bits. This indicates that the horses were harnessed and possibly ridden. Additionally, analysis of organic residue in ceramics of the Botai culture revealed traces of horse flesh and mares’ milk, which shows that horses were used as a food source as well.

The skeletal structure of the horses from the Botai culture also demonstrates the likelihood of selective breeding. Unlike the bones of wild horses of that time period, the bones found in the Botai civilization are very similar to those of domesticated horses from centuries later, indicating that humans were already breeding these horses for certain desirable traits.