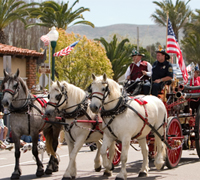 The San Juan Capistrano Swallows’ Day Parade will be held on March 21, 2009.   Fiesta de las Golondrinas, meaning Festival of the Swallows, activities pay tribute to the annual return of the swallows and San Juan Capistrano’s Spanish and western heritage. The festival began in the 1930s and grew to include an equestrian parade, trail ride and western dance.

Melitas Forster, great granddaughter of Don Juan Forster and original owner of the Swallow’s Inn, will serve as this year’s grand marshal.

The annual parade concludes a series of festivities that occur in San Juan Capistrano throughout the month of March.

The Fiesta de Las Golondrinas is tied to the legendary return of the swallows to the Mission San Juan Capistrano on St. Joseph’s Day, March 19th.  The square-tailed cliff swallows spend the summer in San Juan Capistrano and leave in late October to travel 6000 miles for a winter in Goya, Argentina.

Read about equestrian entries in the Rose Parade.

Learn how to get your horse ready for a parade. 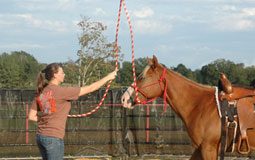