Montana slaughter bill goes to governor
The Montana Senate approved a bill by a 27-23 vote on Friday that would allow the construction of a plant to slaughter horses for human consumption. From Thoroughbred Times. Read more >>

Horses a valuable tool in anti-gang program
Sade’e Weatherby fell in with the wrong crowd a few years ago. Things weren’t looking good. Her mother was worried. From Star News Online. Read more >>

Does a ‘seeing-eye horse” go too far?
If horses could talk, they’d surely say nice things about Tabitha Darling. The horse she’s currently training was abused by a previous owner. From Texas Cable News. Read more >> 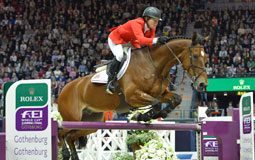