Video: Abuse of Tennessee Walking Horses
The Humane Society of the United States presented a new video exposing the cruel practice of soring at the second annual Sound Horse Conference in Gainesville, Fla. over the weekend, and hopes attendees will use the video to bring further awareness to soring as it’s used in the Tennessee Walking Horse industry. From The Tennesseean. Read more >>

Helmet act in memory of young rider advances
Three years ago Gary Hornstein lost his daughter after she was thrown from her horse and took a deadly blow to the head. From Palm Beach Post. Read more >> 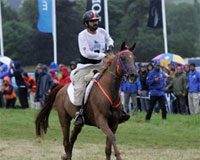