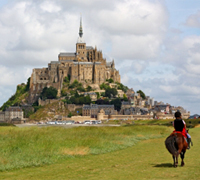 “The allocation of the 2014 FEI World Equestrian Games to the region of Normandy in France is an important development for the future of our sport. The bid committee in cooperation with the French Equestrian Federation have worked for eight years and presented a project of outstanding quality and vision which enjoys the support of the French government and regional authorities, and presents us as a sport with an exceptional platform in the very heart of a region that shares our passion for horses,” said FEI President HRH Princess Haya Bint Al Hussein.

Laurent Beauvais, President of the Regional Council of Basse-Normandie and President of the Organizing Committee Normandie 2014 said, “Hosting the FEI World Equestrian Games represents an exceptional opportunity for the promotion and development of Normandie on the international level. Normandy is the first region in France for horse breeding and champions. Normandy has a true legitimacy to host the most prestigious equestrian competition. Normandy is proud to take up this challenge. I would like to dedicate this victory to all the local public authorities that were part this bid.”

“The French Equestrian Federation, third national federation with 600,000 members, is proud that France obtained the organization of the 2014 FEI World Equestrian Games. Thank you to all of those who have worked for a successful bid and to the FEI for this mark of confidence.”

About the FEI World Equestrian Games

The FEI World Equestrian Games are the combination of the world championships of all eight FEI disciplines – Jumping, Dressage, Eventing, Driving, Endurance, Vaulting, Reining, and Para-Equestrian – held concurrently at the same place. They take place every four years.

No fewer than 900 horses, 800 riders and drivers from 60 nations and 300 000 spectators are expected to gather for two weeks of competition in August 2014. The FEI World Equestrian Games will be broadcast widely and is expected to generate important economic, tourist and sports benefits.

Normandy is the symbol of the vitality of the French horse industry. It boasts a natural environment favorable to all horse activities, first rank infrastructure, renowned equine research centres, and high level industry related to horses. Many competitions are organized in Normandy each year.

The French State along with local authorities and the French Equestrian Federation aim at integrating the 2014 FEI World Equestrian Games into a global strategy of local development. This strategy includes supporting high level athletes, popularizing horse sports and promoting the horse industry.

Catch up on the latest 2010 World Equestrian Games News >>