Radcliff artists paint Gallopalooza horses
A fiberglass horse, painted to represent Kentucky’s modern civil war, rode up to Louisville on Monday in the bed of a pickup. From The News Enterprise. Read more >>

Clip-clopping to the rescue
A rock sailed through the air and cracked Sgt. Roger Lefebvre in the face at a police anti-brutality march last month. His Plexiglass visor bore the brunt of the shock. What upset him more was that his partner, on whom he was sitting, also received a rock in the face. From Montreal Gazette. Read more >>

You Can Win a Morgan Horse!
Have you always dreamed of owning your own Morgan horse? You can, thanks to the American Morgan Horse Association, Team Morgan, and Copper Beech LLC! From AMHA. Read more >> 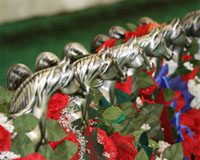