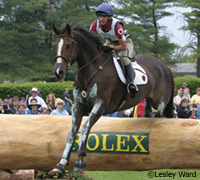 The Rolex Kentucky Three-Day Event, set to return to the Kentucky Horse Park in Lexington, KY, April 23-26, will feature a Who’s Who of the world’s best eventing horses and riders.

The Rolex Kentucky Three-Day Event, a part of the HSBC FEI ClassicsTM Series, will run a CCI**** and the 12th championship for the U.S. Equestrian Team Foundation Pinnacle Cup, signifying the zenith in Eventing competition in the United States. The event draws over 100,000 spectators and millions more via worldwide telecasts including a one-hour special in the U.S. on NBC on Sunday, May 3.

Led by defending Rolex champion and four-time Olympic veteran Phillip Dutton of the United States on Connaught, the list of confirmed entries includes:

Bettina Hoy of Germany on Ringwood Cockatoo, winners of the 2008 Pau CCI****;

Peter Thomsen of Germany and The Ghost of Hamish, members of the 2008 Olympic Gold Medal Team;

Lucinda Fredericks of Australia with her mount Headley Britannia, members of the 2008 Olympic Silver Medal Team;

William Fox-Pitt of Great Britain, a member of the 2008 Olympic Bronze Medal Team and winner of the 2008 Land Rover Burghley Horse Trials CCI**** and the inaugural HSBC FEI ClassicTM Series.

The Rolex Kentucky Three-Day Event will feature 54 of the world’s best horses and riders from nine countries vying for their share of $250,000 in prize money and a chance at the $350,000 Rolex Grand Slam of Eventing. The owner of the winning horse will be awarded $80,000 and the winning rider will receive a classic Rolex timepiece.

“This year’s Rolex Kentucky Three-Day Event promises to be the most exciting ever,” said Jane Atkinson, Executive Vice President of Equestrian Events, Inc. (EEI), producer of the event.  “As anticipation continues to build for the 2010 Alltech FEI World Equestrian Games, the level of competition at Rolex is at an all-time high!”

The only Four Star Event in the Western Hemisphere, the Rolex Kentucky Three-Day Event is the premier competition for the top horses and riders in Eventing.  Past winners include United States Olympic Medalists David and Karen O’Connor, Kim Severson, Phillip Dutton, New Zealand’s Blyth Tait and Nick Larkin, Pippa Funnell of Great Britain and Andrew Hoy and Clayton Fredericks of Australia.

Eventing fans will have the opportunity to watch live action from Rolex Kentucky on Pay-Per View webcasts on www.rk3de.org, featuring coverage of Dressage on April 23-24 and of Cross Country on April 25.  Free live coverage of the Show Jumping on April 26 will be available online at www.universalsports.com.

Visit HorseChannel.com this weekend to keep up with the latest Rolex news.