After a long, hot afternoon of show jumping–peppered with two-minute commercial breaks for a live international telecast–the top three placings were unchanged.

Buck Davidson went third-to-last, and jumped clear on My Boy Bobby in 10 seconds under the time allowed. Second-to-last up was Bettina Hoy of Germany on Ringwood Cockatoo, who also jumped double-clear to secure at least second place and a $37,000 prize.

The pressure was on provisional leaders Lucinda Fredericks of Australia and her mare Headley Britannia, who could afford one rail to still win. As it turned out, they didn’t need it–the duo turned in a double-clear round, and Fredericks let out a loud whoop as they sped through the finish flags. The crowd laughed and cheered their approval.

During the ribbon ceremony, Fredericks cried for a good 10 minutes as captured by the jumbotron, graciously accepting the $80,000 prize to the winning horse’s owners (her and her husband, 2007 Rolex winner Clayton Fredericks) and the brand-new Rolex watch awarded to the winning rider. In a rare move for a rider, she asked if she could say a few words, thanking the organizers and many people who had made the win possible for her and “Little Brit.”

Although Bettina Hoy had a plane to catch after receiving her prizes, Buck Davidson and Lucinda and Clayton Fredericks stayed to give a press conference after the victory gallop. Lucinda said it was Clayton who convinced her to come to Rolex instead of going for another win at Badminton with her mare next weekend. When asked how he felt about his wife’s win, Clayton said, “The pressure’s reverted to me now! I’m riding The Frog at Badminton.” He did not bring a mount to Rolex this year.

Fredericks was all smiles as she sung the praises of her horse, her supportive family, and her groom. “I’m looking forward to coming back [to the Kentucky Horse Park in 2010] for the World Equestrian Games. We’ll be hungry for gold!” she warned. Fredericks complimented the course and the footing, as well. “The ground was super, and we really went for it after the Head of the Lake,” she said of her fast cross-country round. As for the new synthetic footing in the Outdoor Stadium that was being used for the first time ever, the ground made all the difference. “The horses really love jumping off it, which is a good feeling for a rider,” Fredericks said.

As the highest-placed American in the competition, Buck Davidson gave all the credit to his horses. “The course didn’t seem as hard to me this year, but maybe it was because I was riding better jumpers,” he said half-jokingly. “I wasn’t nervous at all [before show jumping]. I have no idea why! I was pretty nervous for cross-country, and usually I ride better when I’m nervous.” Buck also turned in a double-clear show jumping round with his other mount, Ballynoe Castle RM, for a 15th place finish. His father, Bruce, was in the top 20 as well with one of his two gray mounts, Cruise Lion, who finished 19th. Phillip Dutton also did the U.S. proud, finishing in the top 20 with both of his horses (seventh with Connaught and 12th with Woodburn).

After watching a whole lot of jumping today, I would have to say the two riders I would most like to emulate were Phillip Dutton, who stayed perfectly calm and quiet at all times, and William Fox-Pitt (sixth and 23rd on Seacookie and Navigator), whose lower leg quite literally does not move one iota while galloping or jumping over fences!

The show jumping course at Rolex is an enjoyable sight to see too, even apart from when it’s being jumped. Each fence is built meticulously to a theme–there is the Churchill Downs fence with miniature twin spires on the standards; the Keeneland Race Course jump that mirrors the historic, statuesque posts seen at the track; the Rood and Riddle Equine Hospital jump made from the colors and logo of the world-famous vet clinic; the Calumet Farm jump with its iconic red and white barn architecture; and many others.

All too soon it was time to head out until next year. The trade fair vendors were madly pitching things into moving trucks after the crowds poured out, but the Kettle Korn booth was kind enough to stay open a little longer and sell us a snack for the hike back to the car. Hopefully everyone left inspired to improve their horsemanship in whatever discipline they ride after seeing such a show of equine and rider talent. 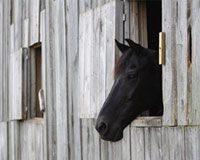