Around the world on horseback
Over the past decade, Beverly Gray has traveled to Spain, Argentina, the United Arab Emirates and, most recently, Malaysia. From ParkRecord.com. Read more >>

Glamour girls give dressage a facelift
Dressage is busting out all over. A sport previously characterised in the public mind by top-hat-‘n’-tailed toffs now has a rapidly rising media profile because of the models, pop stars and footballers’ wives who have recently become hooked. From Telegraph.co.uk. Read more >>

Debate Over I Want Revenge’s Injury
How severely injured is the Wood Memorial winner I Want Revenge? He was the morning-line favorite for the Kentucky Derby when he was scratched the morning of the race on Saturday. From New York Times. Read more >>

One reaction to Mine That Bird’s Derby win? Complete shock
Unlikely Kentucky Derby winner Mine That Bird is on the cover of SI this week. He’s the first horse on the cover since Smarty Jones after winning the Derby in ’04. From Sports Illustrated. Read more >>

Loving horses will retire together
Two inseparable horses are set to retire together after spending a total of 30 years in the police force. From The Associated Press. Read more >> 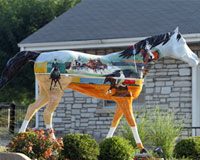