It has been chosen. A panel of judges has spoken, and a winner has been selected from the more than 100 entries received last week in Old Friends “Name that Horse” challenge.

For the competition, participants were asked to submit a name for the five-year-old horse recently rescued by Old Friends, the Thoroughbred Retirement Farm in Georgetown, KY , from Ernie Paragallo’s upstate New York stable. The horse was one of 177 Thoroughbreds found in various states of neglect.

And the winning entry is: Escape From New York, submitted by Fred Jones of Lexington, KY. The apt moniker is borrowed from the 1981 John Carpenter action-thriller starring Kurt Russell.

“I had the name ‘escape’ and the farm was in New York so it just seemed right,” said Jones. “I wanted the name to reflect where the horse came from, what he had to endure, and to send a clear message that he truly had ‘escaped’.”

Jones has already been out to visit.

“It’s a perfect name,” said Old Friends president and founder Michael Blowen. “We are going to call him Snake around the barn–that was Kurt Russell’s name in the film.” Blowen adds that the unregistered Thoroughbred has been wearing a halter with a question mark on its nameplate.

Old Friends has now officially registered the horse through the cooperation of the Jockey Club. To meet their requirements of no more than 18 characters per name, however, his name will appear as ESCAPEFROMNEWYORK.

Fans are invited to come out and visit the new retiree, who is recovering well at the Georgetown facility. For more information please contact Old Friends at (502) 863 1775

Snake’s former owner, Ernie Paragallo, was charged with animal cruelty for the neglect of 177 horses at his Thoroughbred breeding farm. He is currently free on bail and his court hearing scheduled for April 20th was postponed at the request of his lawyer. A new date has not yet been set. 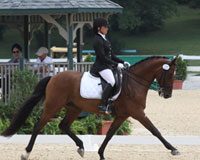 Dressage National Championships will be held at the Kentucky Horse Park