W. Neb. woman plans to write about horse rescue
After more than 200 horses were rescued from a western Nebraska ranch, one woman says she plans to write a book about it. From KTIV. Read more >>

Przewalski horse foal
“They’re one of the most beautiful species on the planet in my opinion. Up until the middle of last year they were extinct in the wild.” From ABC.net.aus. Read more >>

BLM sets wild horse roundup
Federal officials are planning a massive roundup of nearly 1,000 wild horse later this year in an effort to reduce populations on Wyoming rangelands, according to Bureau of Land Management officials. From The Casper Tribune. Read more >>

The Neighbors Just Love Carrots
Modern maps call it Clinton, but in the late afternoon, Midtown Manhattan’s far western edge might be better described as the Circle NYC Ranch. From The New York Times. Read more >>

BLM mulls options for mustangs
Documents obtained from the Bureau of Land Management through the Freedom of Information Act that detail management options which include destroying animals have outraged wild horse advocates. From Contra Costa Times. Read more >> 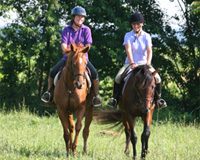