Horse Tripping to be Outlawed by Governor Brewer
Its practice is even dumber than its name. “Horse tripping,” a “sport” where “cowboys” track and literally trip a running horse, is expected to be outlawed by Governor Jan Brewer today. From Phoenix New Times. Read more >>

Park bans horse carts in dung row
Jaunting car drivers have been banned from taking their horse carts into an Irish national park after refusing to fit them with dung-catching devices. From BBC News. Read more >>

Funny Cider has look of a winner
Mint juleps might be the drink of choice at the Kentucky Derby, but one former winner is now marketing his own beverage, substituting apples for mint and leaving out the bourbon. From The Lexington Herald-Leader. Read more >> 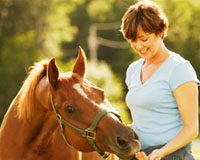