House votes to save wild horses, burros
The House has voted to expand the range of the nation’s wild horses and burros by millions of acres and to block a plan to kill thousands of the animals to prevent overgrazing. From The Associated Press. Read more >>

Mich. girl, 7, has finger bitten off by horse
A horse has bitten off the little finger of a 7-year-old Battle Creek girl. From The Chicago Tribune. Read more >>

Barbaro lives on in hearts of enthusiasts
The first thing you have to understand is that Carol McKenzie won’t be driving six hours just to see a horse. From The Richmond Times-Dispatch. Read more >>

Nicanor scratched from Virginia Derby
Nicanor, full brother to ill-fated 2006 Kentucky Derby Presented by Yum! Brands (G1) winner Barbaro, has been scratched from Saturday’s $750,000 Virginia Derby (G2) in what would have been his stakes debut. From Thoroughbred Times. Read more >> 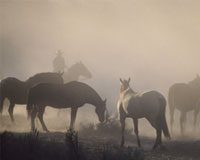