The American Paint Horse Foundation made history this summer during the World Championship Paint Horse Show at the Will Rogers Memorial Center in Fort Worth, Texas, when the non-profit charitable organization hosted its first-ever therapeutic riding event – the “Freedom Challenge.”

The Foundation fielded 63 entries on July 2 and 3, when a total of 32 riders and 25 horses from seven Texas-area therapeutic riding centers were in the World Show spotlight. Three of the entries were logged when the Foundation granted a wish for a youngster and his two sisters in conjunction with the Make A Wish Foundation. They were able to ride horses and participate in their first horse show.

Classes for all exhibitors included free-style exhibitions in which participants displayed their riding abilities four at a time in the arena, while a therapeutic riding center representative described their maneuvers. The exhibitors’ talents ranged from Western and English mounted demonstrations to in-hand Showmanship and physical exercise regimens. The riders were also invited back for Western Pleasure and English Equitation rail classes, where they were asked to walk, jog, back-up and reverse directions on their horses.

All the riders were exceptional in their abilities and earned special Paint Horse trophies from the Foundation.

Regarding the horses participating, many were retired show horses. Although some may have aged or lost a step in the competitive arena, they proved their value by serving a higher calling – to help children rehabilitate.

Honorary judges for the event included some of the many supporters of the Foundation’s work. There to present special trophies to the riders were:

The next therapeutic riding demonstration will involve a dinner, a benefit auction and riding demonstration on Oct. 1, 2009, at Bell Mountain Stables in Castle Rock, Colo., during APHA’s Annual Convention. Haynes and Boone LLP, an international law firm, and Ford Farms of Las Vegas, Nev., were the first to step up with a $500 donation each to support the event.

For details on sponsoring or attending the October event or to help the Foundation’s Therapeutic Riding fund grow, contact: 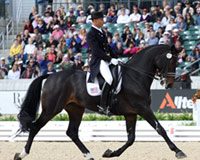 Get to know the U.S. Olympic Dressage Team