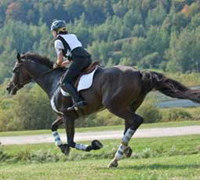 The 2009 Adequan FEI North American Junior & Young Riders Championships (NAJYRC) presented by Gotham North will welcome junior and young riders from across the expanse of the continent to a much-anticipated and highly-regarded series of championships. The events began Wednesday, July 22 with the opening ceremonies and a kick-off celebration.

The NAJYRC is the premiere equestrian competition in North America for junior and young riders age 14-21. Young equestrians come from the United States, Canada and Mexico to vie for championship titles in the three Olympic equestrian disciplines of show jumping, dressage, eventing, plus the Western-style discipline of reining. The competition is run under rules of the International Equestrian Federation (FEI), the international governing body for equestrian sport.

The 2009 series of championships will be one of the biggest in the history of the event with an increase in the number of entries, as well as the number of demonstration events having grown substantially. In addition to the higher number of competitors seeking a victory, there are two non-Olympic equestrian disciplines participating with riders taking to the endurance trail and the vaulting arena in non-championship events.

Many of North America’s best equestrians got their start at the NAJYRC including Olympic medalists Greg Best, Karen O’Connor, Chris Kappler and McLain Ward.