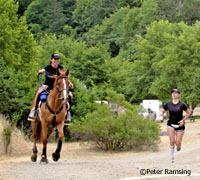 Michelle Andreotti of Granite Bay, California, and her sister Susanne Rowland of Rocklin, California, put the family name on a new chapter of Andreotti history in the sport of Ride & Tie and at the same time finally realized the prediction of Bud Johns, inventor of the sport: that a woman/woman team would out-race the men and snatch the World Championship title. Adding glitter to their crowns, their race horse, Over Amile, was deemed Best of Condition.

“There have been so many remarkable women who have been competitive in the sport since the start that it was inevitable that the right two would team up to win the whole shebang,” says Johns. “Women can be excellent runners at distances, can be superb horse (wo)men and often are lighter on the horse which helps the equine member of the team,” he continues.

Most recently competing at the World Championship level in the mid-1990s, the sisters had drifted away from the sport. Then, last year, the family was asked to attend the 2008 World Championship Event to witness the induction of their father Dave Andreotti’s horse Scooter into the Ride & Tie Hall of Fame. They were re-bitten by the bug: by July they bought “Over Amile” and were training for this year’s race. The sisters live about ten minutes apart, and the horse is stabled between the two.

Rowland says she’s pretty competitive and it was her idea to try the Championship race this year. They hoped to finish in the top five. “The course worked to our advantage; I like to run the uphills”. Simultaneously, Andreotti would ride up the hill catching Rowland at or near the top, where they would switch. Converse to her sister, Andreotti likes to run the downhills. They let the horse pick its own pace, which on this course was usually a canter.

Returning to the location of the 2007 Ride & Tie World Championship, the 39th annual event took place June 20th 2009 at Cuneo Creek, in the Humboldt Redwoods State Park, adjacent to the Avenue of the Giants. At approximately thirty-four miles in length the winning time was three hours, fifty seven minutes.

The Ride and Tie Association will be celebrating forty years of riding and tying throughout the week of June 12-20, 2010 at Mount Adams, WA. The 40th Annual World Championship Ride & Tie, open to all comers, will be raced on location Saturday June 19, 2010.

About the Sport of Ride & Tie
The sport of Ride & Tie combines trail running, endurance riding, and strategy. The goal is to get all three team members, two humans and one horse, across a 20 to 100 mile cross-country course by alternating riding and running. Everyone starts out together. The rider, being faster, rides ahead and ties the horse to a tree, and then continues down the trail on foot. The team member who started out on foot gets to the horse, unties, mounts up and rides past the runner, ties the horse … and this leapfrog continues the entire course. When, where, and how a team exchanges riding for running is almost entirely up to each team to develop their own strategy.

About The Ride and Tie Association
The Ride and Tie Association is a 501(c)3 non-profit organization dedicated to the promotion of the sport of Ride & Tie and safe endurance horse management. Over 150 years old, Ride & Tie originated in the old West, where frontiersmen discovered two men could travel great distances at a fast pace without wearing down the horse if they traded off. Ride & Tie was invented as a sport and gained national attention in 1971 when Levi Strauss sponsored the first Levi’s Ride & Tie. The Association offers a mentor program, partner matching, training videos, hosts practice Ride & Ties, and sanctions regional and national events. For more information about Ride & Tie, visit the web site at www.rideandtie.org.

Meet the Horses of the United States Para-Equestrian Team