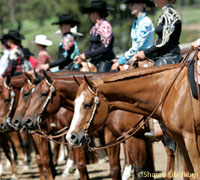 Members of the American Quarter Horse Youth Association are heading to Oklahoma City for the 2009 Ford AQHYA World Championship Show. The excitement begins July 31 and will continue through August 8 at State Fair Park.

The Ford Youth World Show is the world’s largest single-breed show for youth. This year the show has 2,474 entries. The Oklahoma City economy will get a $10.9 million boost during the show’s run.

The 883 exhibitors will have plenty to see and do in Oklahoma City when not in the ring competing for world champion honors in the 33 equine events.

On August 1 and 6 at 4 p.m., free food and fun will be offered at the trade show. Take a break from the competition and mingle with your fellow AQHYA members while enjoying a free Coke float. While at the trade show, stop by the AQHA booth to win great prizes in the new Get Tagged Contest featuring AQHA Corporate Partners. Tags have been placed in various AQHA Corporate Partner trade show booths and throughout the show grounds. Using a smartphone’s camera and the Microsoft Tag application, take a picture and see where that Tag takes you on the Internet.

If you need a break from the Oklahoma summer heat, cool off at White Water Bay or Frontier City with a special rate just for AQHYA members. For $17 per person, AQHYA members can kick off their boots and enjoy the water slides and pools or the roller coasters and rides. Visit the AQHA booth for more details.

On Wednesday, August 5, AQHYA members will have a chance to mingle at a mixer and talent show in the Sales Pavilion. Paul Bogart will perform following the talent show.

If you can’t be in Oklahoma City, don’t miss any of the action. Watch all the action in the arena through the Fort Dodge Webcam and check out behind-the-scenes video from AQHA’s QJs sponsored by Oklahoma’s State Fair Park. QJ videos will appear on You Tube and on the Ford Youth World Show Web site.

To see the Ford Youth World Show schedule and all the online coverage, visit www.aqha.com/youthworld.