Horses to be farmed out
Colleton County will keep the 47 horses rescued from a Bible camp after a judge denied an appeal from their owner Tuesday. From The Post and Courier. Read more >>

Mexican man arrested for punching police horse at Lollapalooza
The gray skies grew darker Sunday in Chicago when a man allegedly punched a horse as the Lollapalooza music festival drew to a close. From LA Times. Read more >> 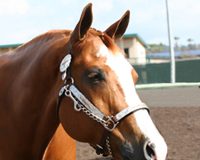