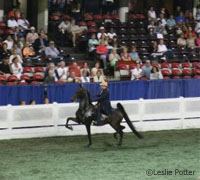 Every year in August, exhibitors and enthusiasts of American Saddlebred horses celebrate the breed at the World’s Championship Horse Show during the Kentucky State Fair in Louisville. The breed was developed and established in Kentucky, and the show been a highlight of the state fair since 1902. This year the show runs from August 23-29.

Saddlebreds compete in a wide variety of disciplines; however, the World’s Championships primarily feature saddle seat and driving divisions. The majority of Saddlebreds compete in three-gaited divisions where they are judged at the walk, trot and canter. The spectator favorites are the five-gaited classes where horses perform the smooth, animated slow gait and rack in addition to the regular gaits. Saddlebred western pleasure is a recent addition to the show with that division’s rapid growth on the Saddlebred show circuit. Hackney ponies and Standardbred road horses also compete at the show.

Winning horses in the championship classes earn WC (World’s Champion), RWC (Reserve World’s Champion) or WGC (World’s Grand Champion) prefixes on their registered names. The most prestigious classes of the show are the World’s Grand Championships for five-gaited, three-gaited and fine harness American Saddlebreds. These classes are held on the final evening of the show, which is a popular, formal social event for many in the Saddlebred world. This year, Stake Night falls on August 29.

Saddlebred enthusiasts who cannot make it to Louisville can watch online for a fee. Live streaming of the entire show is available at the American Saddlebred Horse Association’s website. Results and judges’ cards will also be available daily.