Tickets for Seventh Annual Syracuse Invitational Sporthorse Tournament Now On Sale
Tickets for the Seventh Annual Syracuse Invitational Sporthorse Tournament featuring the 126th National Horse Show are now on sale to the public and available at the Oncenter Box Office in Syracuse, NY, and through Ticketmaster. Fom USEF. Read more >>

Horses deliver samples from Canada
On Monday, 50 DNA samples arrived at the Texas A&M University veterinary school, having been delivered on horseback from Canada. From The Battalion. Read more >> 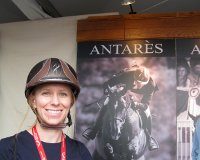