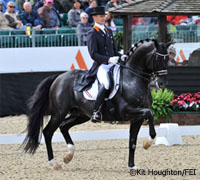 Dressage riders are constantly pursuing perfection in their sport, most of them well aware that they will never achieve it. Last weekend at the 2009 FEI European Championships, one Dutch horse and rider team came closer than anyone ever has before.

Edward Gal rode his KWPN Stallion, Moorlands Totilas, to an unprecedented 90.7 in the Freestyle held at Windsor Castle in England. The pair broke their own record, an 89.4 from the Exquis Dressage Masters at Hickstead, England, in July of this year.

The performance was marked by Totilas’ flashy, high-stepping piaffe and extended trot. The stunning black 9-year-old, who goes by the barn name Toto, was approved as a KWPN (Dutch) breeding stallion after winning silver in the Grand Prix Special at Windsor.

Gal previously trained with another Dutch dressage legend, Anky Van Grunsven, and has surpassed her several times in recent competitions. Besides this year’s European Championships, Gal also won all three tests at the Dutch championships in June of this year while Van Grunsven came in second.

For her part, Van Grunsven earned bronze in the Freestyle at the European Championships while Adelinde Cornelissen earned the silver, giving the team from the Netherlands a dressage medal sweep.