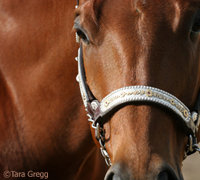 Poco Pine
Paul Curtner bought Poco Pine during the dispersal of Paul Waggoner’s 3D Stock Farm in 1954 when Curtner was searching for a filly by Poco Bueno and out of a Blackburn mare. Instead, Curtner’s wife encouraged him to buy Pretty Rosalie, a Pretty Boy mare with a long-haired colt, Poco Pine, at her side.

Poco Pine was named after Pine Johnson, Poco Bueno’s trainer, who had been enthusiastic about the colt when Curtner was not.

In addition to his 135 AQHA points in halter, Poco Pine earned 15 points in cutting and 2 in western pleasure. He was an AQHA open champion and earned his Superior in halter. He earned $776.11 in NCHA competition during the 1950s.

His get earned $14,794 in NCHA competition and $3,428 at the AQHA World Championship Show. Of 464 offspring, 199 earned 10,949.5 points, with 41 becoming AQHA Champions. One of those foals, Great Pine, went on to be a major sire of reining horses as well as an AQHA Champion. Poco Pine’s son Poco Pecho sired Pecho Dexter, a Hall of Fame inductee.

Rocket Wrangler
Rocket Wrangler was foaled in 1968. In 1970, he hit the racetrack, winning seven of his 13 starts, including the Rainbow and All American futurities. He was the year’s high-money-earning horse and was named world champion 2-year-old colt.

After his 1970 win of the All American Futurity, at the time the richest horse race in the world, owner J.R. Adams of Guymon, Oklahoma, sold a half-interest in the horse to B.F. Phillips, who retired the horse to stud.

Rocket Wrangler spent two breeding seasons at Phillips Ranch, then Adams bought back his half-interest and returned the horse to the track. Rocket Wrangler at age 4 won the New Mexico State Fair Handicap over a field that included champion Mr Kid Charge. He was retired from racing permanently in February 1973 and was syndicated in 1980. He sired 1,629 foals, with 1,221 starters and 762 winners.

He was euthanized November 28, 1992, after suffering from colic and was buried at Royal Vista Equine in Fort Collins, Colorado, where he was standing.

In the meantime, he was also earning his way as a roping horse. He was the high-point steer roping horse in 1979, the same year he was world champion aged stallion. In 1980, he placed third at the AQHA World Championship Show in senior heeling, the same show at which he defended his world championship in aged stallions. He also placed in the top 10 at the World Show in heading and heeling. Zan Parr Bar also earned points in reining and western pleasure. In his lifetime, he acquired 602 points.

He retired from the show ring after the 1980 World Show. He continued to be ridden on the ranch while being used as a breeding stallion. His foals earned 44 world championships and 33 reserve world championships. His foals had 43 year-end high-point wins, five year-end all-around high-point wins and three reserve year-end all-around wins. In all divisions combined, his foals have earned 25,593.5 points. Of 653 foals, 236 have been point-earners.

Zan Parr Bar died November 27, 1987, of colitis X. At that time, he was AQHA’s leading sire of performance horses.

In 1967, he was among the small group founding the All American Quarter Horse Congress. Through the years, he helped refine the show into the event it is today, taking on the ground work as his responsibility, a task he continued for 20 years.

In 1970, at age 48, Stretch became a full-time professional trainer, hauling Hall of Famer Miss Jim 45 in a 1970 show campaign that ended with 134 wins, 118 grand champion awards and 436 AQHA points for an honor roll title. In 1971, Stretch led Gold Margarita to the open year-end high-point title. In 1975, he did the same for Vallerina Miss, adding a world championship in aged mares. At the time, he was considered one of the nation’s best halter trainers. He often hauled to horse shows with youth exhibitors, such as Cindy Johnson, who won four youth honor roll titles.

In 1988, Stretch was named to the NRHA Hall of Fame’s third induction class, just months after his death at age 66, based in part on his commitment to seeing horses had the best possible grounds at Ohio horse shows and reinings. That same year, he was inducted into the Congress Hall of Fame.

Carol Rose
Carol Rose began competing in 4-H horse shows at age 8 in California. In college, where she was earning a degree in animal science and ag business, she was the high-point individual judger at the 1962 National Western Stock Show in Denver. In the early 1960s, she focused on reined cow horse competition.

She was the first woman to serve on the AQHA judges committee. She has served on the international committee and the long-range planning committee and is a member of Texas Quarter Horse Association.

In 1966, Carol moved to Texas and began breeding horses.

Her stallions Shining Spark, Genuine Doc, Zans Diamond Sun and Zan Parr Bar have extensive records of their own. Her mare Diamonds Sparkle is in the Hall of Fame.

A recipient of the 1999 AQHA Champion Breeder of the Year and the 2000 Gordon Crone Special Achievement Award, Vessels was first appointed to the AQHA Racing Committee in 1992. He was awarded the John W. Galbreath Award for Outstanding Entrepreneurship in the Equine Industry from the University of Louisville’s equine industry program in 2003.

These outstanding horses and individuals will join the other 215 human and equine members of the Hall of Fame who have left their mark on American Quarter Horse history.

The American Quarter Horse Hall of Fame & Museum opened in 1991, and following an extensive redesign, the 44,000-square-foot museum reopened to the public in June 2007. It now features state-of-the-art technology and exhibits. Hall of Fame members are featured in a timeline, which highlights their contributions to the breed.